This is a photographic image from the DreamWorks Animation’s Bee Movie film of Barry the Bee. What makes this so amazing and collectable is that Jerry Seinfeld the voices of the animated character, has signed his name next to his character. Authentic Signature.

The Hive Honey Shop were invited to partnership the UK launch of the Bee Movie. We worked with Paramount Pictures on promotion and teamed up with them to publicise this fun, entertaining film. We were invited to the UK red carpet premiere in Leicester Square, attended by Jerry Seinfeld & Renee Zelliweger. We were able to get them both to sign a number of items for us.

You must call the shop on 020 79246233 to confirm BEFORE ordering any of the items listed within Antique Rare Honeypots. These are rare one off finds. Therefore to avoid disappointment-call first to see if the item is still available. 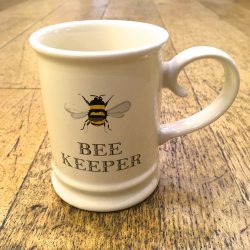 Our mug has a BIG bee with the words BEE KEEPER on both sides of the mug,  Loving used in our own apiary tea room!
not rated £11.95 Add to basket

I have been asked so many times 'do you have a little bee we can put on a cake'! At last we found the solution! These are very friendly little bees that can be used to decorate a multitude of objects including a CAKE! Just don't try to eat them-they are made of wood. The back of the bee has a little round sticky pad. Remove the protective paper cover and you can stick them just about anywhere. Use you imagination and go wild! The price is for a single bee. The photo below is for reference purposes only.
not rated £0.60 Add to basket This is a beautifully made piece. You slip a matchbox inside this decorative cover. It has a cream crackle effect with amazing detailed ladybirds on one side and a green fine felt on the base side to avid scratching any … Continued 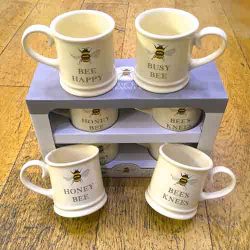 Dishwasher and microwave safe. Nice sized mug with a good grip handle that feels well balanced and a handy finger rest incorporated in the twist handle. Each mug has a big bee with the words BEE KEEPER  on both side of the mug, Light cream coloured glaze. We have many in our apiary tea room! Each mug has a big Bee on it with different wording: 1 HONEY BEE 2 BUSY BEE 3 BEES KNEES 4 BEE HAPPY These are not tiny mocha mugs, but more like half sized mugs. Great if you want a small coffee or tea. Comes in the presentation box as seen in main photo.
not rated £22.95 Add to basket
We use cookies on our website to give you the most relevant experience by remembering your preferences and repeat visits. By clicking “Accept All”, you consent to the use of ALL the cookies. However, you may visit "Cookie Settings" to provide a controlled consent. See our terms and conditions and privacy policy.
Cookie SettingsAccept All
Manage consent