> City life’s a buzz for honeybees 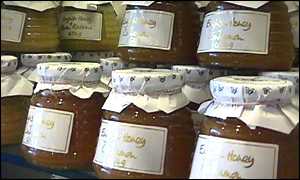 By Nigel Doran, reporter for the BBC’s regional unit

A cool and cloudy summer’s afternoon in the centre of Manchester and the bees on the roof of a partly-used University building are loving every minute.

Exiting their hives and buzzing into the slate-grey skies, they know that only a short flying-time away is a huge and healthy choice of nectar, courtesy of the local authority that’s been busily beautifying this city of industry.

And these urban bees are not alone: metropolitan Britons are rediscovering the ways of the wild, producing honey in their gardens, patios, and even on their balconies.

These Mancunian insects belong to Malcolm Hounsome, professional zoologist and amateur apiarist. Honeybees love town and city life, he says, because of the massive variety of blooms they now have to choose from. Municipal councils spend time and money filling parks and civic spaces with ever-ambitious blooms, meaning there’s always plenty of pollen to go round.

In the countryside, rape seed flowers are ubiquitous, but they succeed at the expense of other, more traditional species. ”Farmers like monocultures, they don’t like weeds, they prefer to maximise their crops ” he says.

” One way or another, there just aren’t the number of wild flowers around in rural areas, whereas in contrast, we’ve been putting a great deal of effort into making the towns much greener. ”

The result is a veritable feast for urban bees, which make original, tasty and plentiful honey, which according to Professor Hounsome, is superior to that coming from the meadows.

He’s been bottling and selling his for the past 17 years, using the wax for candles and furniture polish, and believes that productivity can only increase.

James Hamill is a beekeeper whose life revolves around his bees. His father and grandfather were both professional keepers, so it was inevitable that he too should be bitten by the bug.

Such is his enthusiasm that he’s passed his knowledge on to hundreds of Londoners who all want to bring nature to their doorstep.

”Start up costs are relatively low. With £350 pounds you’re up and running, and the fantastic thing is that you’re set for birthday and Christmas presents for the rest of your life! ”

His current crop of trainees include a housewife, a city trader and a literary editor who willingly give up precious spare time to learn bee-keeping.

”It’s more likely that people deprived of the countryside will want to bring some of it into their living areas, ” says Leon Perdoni, a classics professor.

His fellow student Julie Eddison had no idea her interest would be shared by so many: ”It was the sort of thing you think old people would do, pottering in the garden when they’re retired. But we’ve got all sorts of people. It’s nice.”