As a bee that flew into the light

and didn’t come back

I desire to that day

that I may meet you guys again

I just learned that my good friend Cees has pasted away at the age of 81. I first heard about Cees when back in 1995 I was busy collecting beekeeping artefacts from around the world and looking for rare and unusual beehives. I have a passion for collecting all things related to bees and beekeeping and most certainly beehives. I put the word out among the international beekeeping community, as I had heard about a very special beehive called, ‘The Saint Ambrose Beehive’ and really wanted to add this to my collection. My plans were to open an International Beekeeping Museum. I had heard only a handful of such beehives existed and I was determined to find one.

St Ambrose was the Bishop of Milan around 350AD. There is legend that as an infant, a swarm of bees settled on his face and mouth while he lay in his cradle, unharmed and happy, the bees then flew away leaving behind a drop of honey. It was thought to be a sign from God that he had been endowed with a ‘honeyed tongue’ to pass on the word of God. Among his patronages, he is the patron saint of bees, beekeepers & candle makers. So this hive was a must!

On April 24th 1995 I received a letter from a very kind man Peter Bohlmeijer a Dutch beekeeper that he had a lead. Peter and his wife Wilma had come to The Hive Honey Shop months earlier and had met myself and my wife. We discussed bees, beekeeping, beehives and of course my desire to obtain a St Ambrose beehive. Peter believed that one such beehive had been seen at a festival for beekeepers in Holland some years earlier. Peter took up the challenge to track it down for me and its maker. Now Peter wrote he had good news. That’s when I learned of the name Mr Cees de Roij.

With a name and address, I wrote to Cees and asked if it were true he had made such a beehive and would he be interested in selling it. Then on December 17th 1995 I received a letter from the man himself. He enclosed a photo with dimensions and the price. One look and I knew I had to have it. It was very detailed, fragile and 100cm tall by 42cm wide. So getting it from Holland to England was not going to be an easy task. I finally decided to drive over and personally pick it up myself to avoid any mishaps.

So on January 10th 1996 in my old rusty ford escort van, with my trusty wife and one year old daughter in tow, we three made our journey to Tilburg Holland to meet the master skep maker Mr Cees de Roij, his wife Riet, and his family.

We arrived at their home with no problems along the way. The moment I saw Cees I knew I liked him. He and his wife were so welcoming and though they spoke little English and I spoke no Dutch, we managed to communicate freely. At times I forgot there was any language barrier at all. Cees showed me his many many awards, cups and ribbons he had won for showing his honeys at beekeeping shows. His impressive collection of awards and metals included many gold, silver and bronze, all with his name engraved on them. We were treated to tea and cakes and the conversation flowed.

Then Cees walked over and uncovered a large object in the corner of the room. There it was the St Ambrose beehive. It was truly a thing of splendour. The most stunning aspect of the piece was that the traditional skep straw binding technique was used to shape and form this figure of the man St Ambrose.

Anyone who has ever tried to make a simple basket shaped skep beehive (me included) will know just how difficult that is to make, let alone this huge incredibly complex design of intricate straw, bindings and forethought standing now before me. I just wanted to get it in my car as fast as I could before he changed his mind.

He then showed me the most wonderful piece of art made again out of straw and binding. It was in the shape of a honeybee with a walking stick and skep beehive on its back. It made me smile. It was such a well made piece and I begged him to sell that to me as well.  He finally agreed as he knew it was going to a good home and would be on display at The Hive Honey Shop for many to marvel at. I did have it for many years in the main shop window, but now it stays out of the direct sun but still on view at the shop.

Over the next years I kept in contact with Cees and always hinted to him if he would let me have a few more of his skep artworks. I did manage to get him to agree to letting me have his amazing Banka beehive. I was thrilled as I had seen it at our very first meeting, but at that time he was not yet ready to part with it. His Banka beehive is made up partly in the  traditional skep basket shape with the exception that the front has the most stunningly detailed wooden carved face of a man smoking a pipe. The mouth is an open hollow which honeybees within can use to enter and exit from.

One of my most cherished possession that I was allowed from Cees was his little Dutch beekeeper that he made in 1981. It just makes me feel good inside every time I look at it. I love it. It is of a Dutch beekeeper carrying his skep beehives on his back as they did in those days to transport them around. Cees carved the detailed wooden head, hands, pipe, clogs and then hand stitched the tiny coat, shirt, trousers and hat. And of course the tiny skep hives are in perfect scale and detail. I love the detail of the cloth that covers the base of the skeps. This they would have done in those days to keep the bees inside while they travelled. A remarkable work of folk art telling the history of Dutch beekeeping.

In April 1996 Wilma Bohlmeijer, wife to Peter, wrote an article about The Hive Honey Shop published in Bijen, the Dutch Beekeepers Journal. She wrote, “If you go to London, you must surely visit The Hive a shop………This year January, they (The Hamill’s) visited all kinds of bee museums in Holland. They also bought an Ambrosius Hive for their museum”.

Cees had never been to London. So his son Tony booked Cees his first trip in 2007 but they only had two days in total. They arrived day one and made their way to The Hive Honey Shop where my wife and I were waiting to meet them and show them around the shop.

They arrived and within a few minutes of their arrival it started to rain really hard and fast.  We all laughed about Holland, water, dykes, floods etc. Then I noticed that a trickle of water was making it way from the back garden door down the hallway towards the shop sales area. By now the rain was pounding furiously and Cees, Tony and my wife were looking out the front shop window in amazement at the sea of water rushing down the pavement.

I opened the back door to see where the water was coming from and a one meter high wave of water came flooding in. The drain was blocked causing the back garden area to fill up like a swimming pool. I had no time to react as the wave pushed past me like a river down the whole of the hallway heading straight for the sales area. I looked up to see the shocked, frozen faces of the three looking back at me.

The water continued to enter under the now closed back door, but I knew I had to force the door open once more to get out back to unblock the drain. Again I forced the door open against the weight of the water on the other side, and again a sea of water bound past me. I jumped outside, slammed the door shut, unblocked the drain, ripped my now ruined shoes off and barefoot re-entered the building.

All I see is Tony and Cees, feet wet, mopping the floor by hand. I then remember the BASEMENT! I ran down the stairs followed by Tony only to see the back wall looking like a waterfall. The water from the hallway had found a gap and all the water was now filling up the basement. So poor Cees and Tony who thought they would just pop by for a chat and coffee were now shirt sleeves rolled up, barefoot in a pool of freezing water.

I quickly grabbed some old honey buckets and like a human chain we passed the buckets of water from one person to the next, up the basement staircase which we hurled out the front door. We must have passed 300 buckets of water over the next three hours. At no time did Cees or Tony complain, look fed up, imposed upon or try and run away. They were both amazing and saved our shop. If they had not been there to help, the damage would have been far more serious. With their help we were able to save a lot of the shop.

I felt so bad and really wanted to make it up to them for most surely ruining poor Cees’ first visit to London. I begged them to allow me to take them to dinner. They agreed and I booked the best restaurant on Northcote Road. Cees and Tony went back to their hotel to clean up and we met back at the restaurant. We did laugh a lot about it and I am willing to bet Cees never forgot his first visit to London after that!

I really love and appreciate traditional folk art and Cees was, and always will be one of my best loved artist for that. His attention to detail I truly admired as it is certainly very rare to find. May he continue to make heavenly art.

My best wishes to his family

Cees wrote to me,  The beekeepers at early times had always beehives like this, but one of them had drawn a face on it to keep bad influence away from other bee hives. Made in 1978 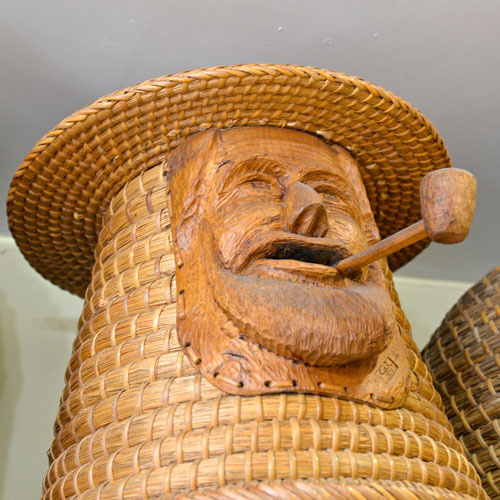 Cees wrote to me, -Saint for beekeeper

-Became 1st prize at festival for beekeepers in Holland 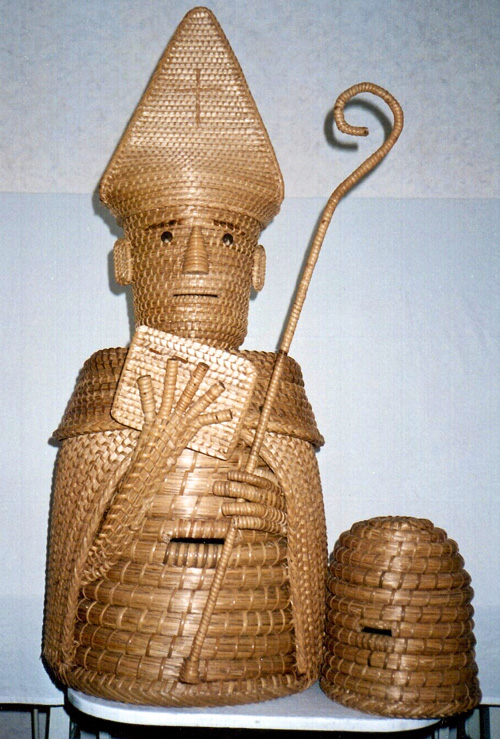 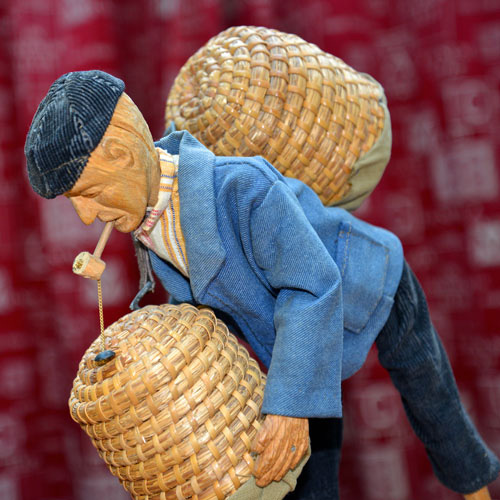 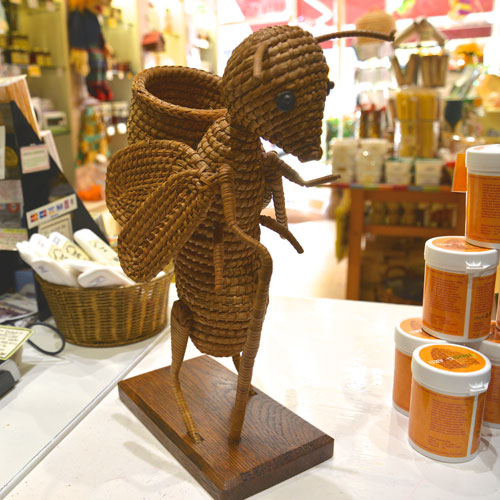