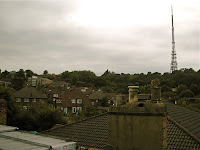 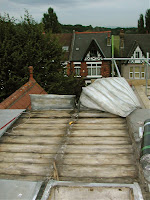 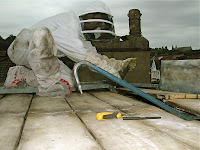 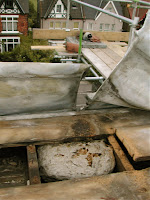 Well I have just got back from my bee call out. I get calls to rescue bees from weird and wonderful places. Today a building firm called because their builders, while removing the lead roofing sheets, disturbed a bees nest. The roofers got stung and abandoned the job until help could be found.

Calling The Hive Honey Shop! I spoke to the lovely Natasha, the firms company secretary. She was keen that the bees were removed ASAP as the roof was exposed and it looked like rain was on the way. I cancelled my other appointments so I could get to this job before the rain did.
Natasha and her colleague Cliff, popped by the shop to finalise the details at 6pm. Cliff was very interested in bees and beekeeping. We spoke about what bees do and how one can keep bees in the city. I think Cliff will be getting his own bees in due course. Cliff if you are reading this, take the plunge! Get the DVD I suggested and join the craft.
The traffic across London was terrible! Is it me or are people driving more aggressively these days. I arrived in South Norwood, the building was scaffolded, but the bees were at the very top. I hate heights and this was HIGH! Going up was not fun, but once up there the view was amazing. I could see the tops of the houses surrounding Crystal Palace. Beautiful area.
Once I was at the top and stepped forward onto the flat roof, I could see at once that the flying insects were not honeybees, but were in fact WASPS. That very moment as I identified them, a wasp stung me on the face. I had my beesuit on but the veil was flipped back as I was expecting honeybees not wasps.
I threw the veil down over my face, only in doing so trapped the wasp inside my veil. It proceeded to sting me repeatedly. I had to keep my wits about me as I was three floors up and no guard rails around me. I was more concerned about falling to my death!
I managed to squash the wasp and quickly put on all my protective gear. The wasps were swarming around my head. I could see the roofers hand tools and gear strued about the roof. It looked like they had been dropped and they had left in a hurry. They must have disturbed the nest and the wasps were defending the area in force. Please note- DO NOT TRY THIS AT HOME! Wasps can kill. Call a professional.
I located the nest under two heavy sheets of lead. In order to get to the nest I had to cut away a section of the roof boards. I removed the nest (after sustaining more stings through the suit!)
The area is now safe and I put back all the lead sheets and made good. Thank god it didn’t rain much. Another day in the life of a beekeeper!